Driving up Highway 101 along the coast of California, you will see a lot of signs for "El Camino Real"  and often a curved post with a bell attached. These bells indicate the old Mission Trail, which connects  a series of 21 Franciscan missions built in Alta California in the 18th century.
We decided to stop at a couple of these missions on our way back to San Francisco. And I had my camera with me.
Nuestra Señora de la Soledad
Originally built in  1791, the chapel and one wing of the original quadrangle were completely restored in 1955, and the chapel still has the original title floor.
Painted ornament of the most basic configurations decorate the chapel  at Mission Soledad.  The effect is whimsical, rich, serene.
Growing up in California I took for granted the "Mission Revival" style of architecture which dominated late 19th and early 20th century development.  But when you walk around a real mission,  features like beamed ceilings, corredors, giant iron candle holders, and deep-set windows make a lot more sense.
San Juan Bautista
Built in 1797 directly above the San Andreas fault, the largest of the California missions has survived a number of earthquakes. Much of the original structure remains,  and the church has been fairly recently restored.
The interior was painted originally by Thomas Doak, and American sailor and carpenter who had jumped ship in Monterey, and who decorated the reredos in 1817, in exchange for room and board.
The outer walls collapsed in 1976 and were  rebuilt within a few years. Since the mid-1990's restoration work has been carried out Dr. Ruben Mendoza and the students of CSU-Monterey Bay.  And done rather nicely I have to say!
The simple ornamentation as well as the color schemes I find very inspiring and really quite useful.
Do you live near an old mission? I am reminded now to revisit my local:  Misión San Francisco de Asís.

The maestro and I took a much needed break and wandered up to Port Costa, to visit the Theatre of Dreams, the studio of artist Wendy Addison.


You may have seen Wendy's beautiful creations before: constructed of ephemera, antique bits, letterpress tags, imagination,  and lots of German glass glitter.  Normally open only "by chance or by appointment"   the shop is transformed during the holidays and open for visitors for a few weekends.


Port Costa is a "census-designated place" - population 190 - the cherished remnants of a 19th century railroad ferry town on the banks of the Carquinez Strait, just north of San Francisco Bay: funky, foggy, romantic, and at times a bit rough.  I used to go there with a long-lost love for dimly-lit dinners at the Bull Valley Inn, or drink with friends at the Warehouse Café.    Tree-lined streets and nostalgia form the backdrop for the creative scene here. 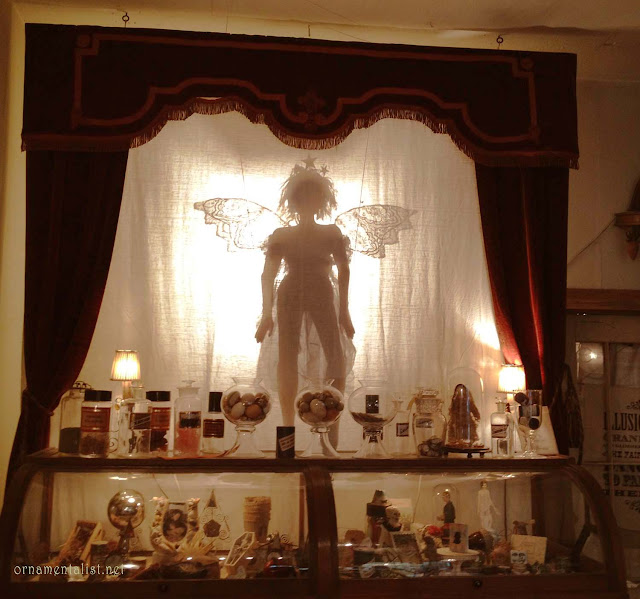 Wendy's work is curious and steeped in Victoriana,  with just enough of the eerie and mysterious to be really interesting.   Peek in the shop windows around Halloween to see how glitter can be macabre.   You can see more of her imaginative creations at her website.

The Doors of Saint-Germain-des-Prés

Last month I spent two fabulous weeks in Paris, staying in a very cool apartment in the chic Saint-Germain district.   One day I wandered around just looking at the wonderful doors.  You do that, too, right?


Paris is a city of limestone, and the entry doors to these limestone facades are the only opportunity for color, so they often get special attention. Even a plain door is given a glossy, gorgeous treatment. Nearly half the doors are oak, although usually if you see an oak door, it's actually a faux finish imitating oak. Some of the painted oak is so realistic I had to look for  signs of wear or peeling paint to be able to tell the difference. 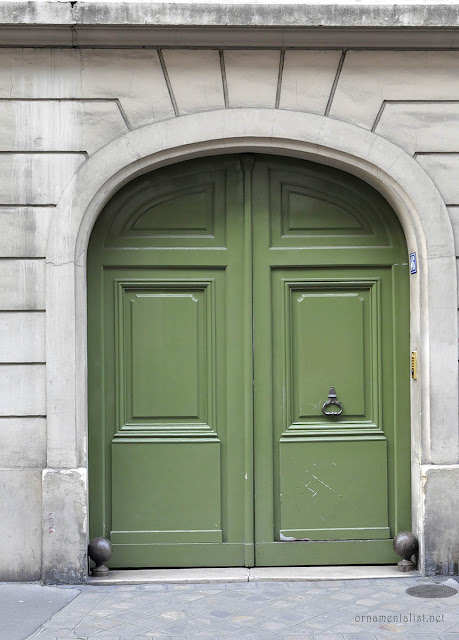 Blues, greens, and greys predominate in this neighborhood. Red appears to have fallen out of favor, perhaps because it fades so quickly.  It seems every color you can think of looks great with limestone. Although there was one safety orange painted door of an art gallery that I really didn't like. I did not take a picture of it.
With rare exception the doors are never polychromed.  All woodwork in an entry or the paneling surrounding it is treated the same.   I am not sure if this is by convention or law.


More of this collection are posted in my flickr set "Doors of Paris".

Just back from two wonderful weeks in Paris and environs, and having to hit the ground running.
Will be back with more soon!

Recently I completed work on a scenic mural  for a home in San Francisco, in the style of  a papier peint panoramique, an extraordinary wallpaper popular in the late 18th and early 19th century.

Interior Designer Gary Spain commissioned me to paint an entire room mural in grisaille, or more specifically using an eau forte palette, which has a warm gray-brown asphaltum color that would compliment his design for the home.  Our clients asked for something chic and urban, with scenes of Paris, but wanted to avoid anything too romantic or dramatic (many scenic papers depict battles and crowds of people), and that we make a personal view of Paris, rather than just the famous sights.
Combing through my fabulous book French Scenic Wallpaper 1795-1865 I found the marvelous "Monuments de Paris" by Joseph Dufour et Cie. This paper was last printed in 1820, and there are few surviving examples of it.  Its design  seemed the ideal reference  for this project, all of the monuments are pre-Hausmann era buildings; some easily recognized, and some not; lined up along the banks of the Seine in no particular order (or scale for that matter) while the viewer sits on a lush, peaceful island in the center of the river.   I knew I could easily adapt this to suit the client's taste and site considerations.

In San Francsico, our City Hall has a dome that pays homage to the dome of  les Invalides in Paris.  I chose this building as the center image of the east wall.
Using some digital images of the original paper from the Victoria and Albert Museum, as well as some photos of actual structures in Paris,  I began design work, tailoring the mural composition for the room, and creating a custom palette divided into the necessary values.

The original wallpaper was block-printed, so in painting in this style, there can be no blending, and colors must be opaquely painted and repeated. To preserve a flat, regular surface, there could be no touching up, no rubbing out of errors.  Each stroke must be confident and committed. While this appears simple, it's actually far more work than using a "painterly" style. The effect is well worth the effort; the room looks rich, calm, and timeless.

While the style of the mural is faithful to the Dufour paper, the composition and many elements in it are entirely original.  The entire mural is scaled to the space and composed to work with the architecture of the room.

Evening in the Forbidden City

Patrons attending the opening night of the San Francisco Opera on Friday were  treated to a colorful performance of Puccini's Turandot as well as  a special gala dinner in a majestic tented Opera Ball Pavilion, An Evening in the Forbidden City.
Event designer Robert Fountain commissioned me to help decorated the pavilion with  large scale portraits of Chinese Emperors. Of course this is right up my alley so of course I said yes.
With only about a week to paint these,  I called in my friend and colleague, Melinda Morey.  We had a brilliant time working together!  We were fairly literal in our painting technique - using a period  Chinese style and including a lot of rich pattern.  I was especially thrilled to be using such pure, saturated color for the magnificent robes of the Emperors: vermillion, gamboge, pure cadmium yellow, indigo, kingfisher blue...

The Gala Pavilion was fabulously draped entirely in red, and the portraits hung and lit to great effect.
After the opera, the party continued with dancing in the Hall of the Emperors. 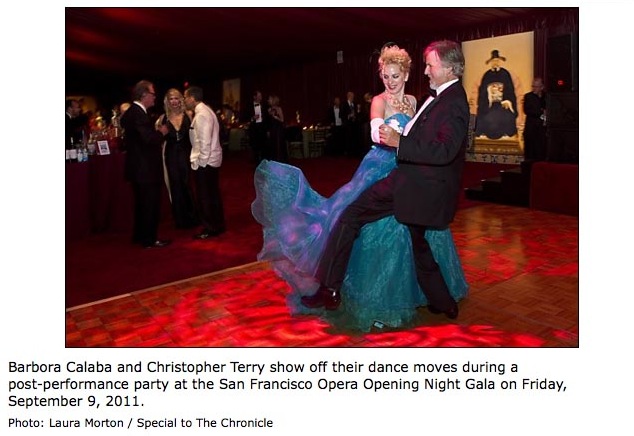 
Murals for special events?  Why, yes!

In the 14th and 15th centuries, plague and wars gave Death a central role in art; the Danse Macabre is an important subject in medieval iconography. Recently I got to visit one spectacular example in Slovenia.


In the middle of our recent visit to Bulgaria, the Maestro was summoned to Klagenfurt, Austria to discuss a new commission.  A side trip within a side trip,  our host Gerhard Lehner, tossed us into his van and drove us to nearby Solvenia to see the marvelous Totentanz of the little church at Hrastovlje, on the Istrian peninsula.


Cerkev Svete Trojice (Holy Trinity Church)  dates from 12th century and is built in a unique Romanesque style.    The now-famous frescoes were painted by Johannes de Castua  and his atelier and completed in 1490.


For a nominal fee photography without flash is allowed.  It never hurts to ask!
The docent inside the church told us that owing to the plague in the 16th century, the walls were "covered in white sheets" (whitewash) and the entire town was burned and for a  time, abandoned.   Centuries later, after  WWII, the whitewash was removed and the frescoes, discovered to be in very good condition, were cleaned and restored.

On the ceilings and elsewhere in the church, colorful frescoes with scenes from the Bible; the months of the year; portraits of saints; faux marbre columns with simple trompe l'oeil capitols;  and stenciled borders embellish every available surface.
But most people come to see the Mrtvaški ples, the astonishing rendition of the Dance of Death.

Graffiti scratched into the walls was also preserved, some of which makes disparaging remarks about the King.  An inscription crediting the artist: "Hoc opus fierit fecit Tomic Vrchovich de… magister Johannes de Castua pinxit"   is repeated in latin and in the old Slavic Glagolitsa.


Though the church interior is early Gothic in its design, the influence of Renaissance Italy is apparent in the murals.


Here is a short video tour of the church (in Slovenian, I think) via YouTube:


Our day continued  in a big loop through  Koper, Trieste, and Aquileia, a day from which I am still recovering!