In the 14th and 15th centuries, plague and wars gave Death a central role in art; the Danse Macabre is an important subject in medieval iconography. Recently I got to visit one spectacular example in Slovenia.


In the middle of our recent visit to Bulgaria, the Maestro was summoned to Klagenfurt, Austria to discuss a new commission.  A side trip within a side trip,  our host Gerhard Lehner, tossed us into his van and drove us to nearby Solvenia to see the marvelous Totentanz of the little church at Hrastovlje, on the Istrian peninsula.


Cerkev Svete Trojice (Holy Trinity Church)  dates from 12th century and is built in a unique Romanesque style.    The now-famous frescoes were painted by Johannes de Castua  and his atelier and completed in 1490.


For a nominal fee photography without flash is allowed.  It never hurts to ask!
The docent inside the church told us that owing to the plague in the 16th century, the walls were "covered in white sheets" (whitewash) and the entire town was burned and for a  time, abandoned.   Centuries later, after  WWII, the whitewash was removed and the frescoes, discovered to be in very good condition, were cleaned and restored.

On the ceilings and elsewhere in the church, colorful frescoes with scenes from the Bible; the months of the year; portraits of saints; faux marbre columns with simple trompe l'oeil capitols;  and stenciled borders embellish every available surface.
But most people come to see the Mrtvaški ples, the astonishing rendition of the Dance of Death.

Graffiti scratched into the walls was also preserved, some of which makes disparaging remarks about the King.  An inscription crediting the artist: "Hoc opus fierit fecit Tomic Vrchovich de… magister Johannes de Castua pinxit"   is repeated in latin and in the old Slavic Glagolitsa.


Though the church interior is early Gothic in its design, the influence of Renaissance Italy is apparent in the murals.


Here is a short video tour of the church (in Slovenian, I think) via YouTube:


Our day continued  in a big loop through  Koper, Trieste, and Aquileia, a day from which I am still recovering!

The Enduring Appeal of Chinoiserie

A History of a Style

Chinoiserie... that inventive fusion of Asian motifs and European sensibilities, can be whimsical, graceful, and theatrical. A major design phenomenon in the 17th and 18th centuries, it continues to be one of the most enduring and fanciful decorative styles in interior design.

I became fascinated with chinoiserie through years of restoring  and repairing hand-painted wallpapers and pieces of “japanned” furniture,  studied its history and techniques, and eventually started painting some of my own designs in similar fashion.


It seems to me that every era has created its own version of chinoiserie,  to emphasize exoticism and escape, or sometimes to be simply colorful and uplifting. In all cases there is a fairy tale dream-like quality that never fails to be charming.


It all began long ago, in a land far, far away…

A Style is Born:
Increased trade between Europe and China  in the 17th century sparked a passion for all things oriental. What started with imports of commodities like tea, porcelain, silk, and saltpetre,  grew to include a new cargo:  a revolution in design.
The growing vogue for rare chinois artifacts inspired fanciful  imitations from skilled artisans all over Europe.  Oriental motifs both real and imagined, with pagodas, birds, monkeys, and figures in exotic costume, were worked into all manner of  fine and decorative arts: everything from garden teahouses to japanned tea boxes were created in a Europeanized oriental fashion. An original and new style was born- not just from the Chinese influence – but far more from the inspiration borne of it.
Fantastic interior design ensued.


The new decorative style was popularized by the French court of Louis XV, as the curves and whimsy of Chinoiserie integrated beautifully with Rococo architectural features.  Soon it became all the rage, with all the royal palaces of Europe creating glittering theme rooms and entire pavilions to house their collections of oriental treasures.

Over the next hundred years the mania for Chinoiserie spread across the Western world, in fashion, furniture, and interiors, even in theater and opera. No palazzo, schloss, or manor home was quite complete without its Chinese room.  In early American interiors Chinese objects and fine, hand-painted wallpapers played a significant role and influenced design in the young United States for generations to come. For a growing nation that longed to be part of the rest of the world, the blending of eastern and western cultures was a symbolic and powerful idea.
Painted Papers: The Flowering of Chinoserie
Early in the 18th century,  the first hand-painted wallpapers were imported from China by the East India Company, and so were  sometimes called  “India papers.”  Produced in China exclusively for the western market, they featured exotic looking flora and fauna delicately painted in brilliant colors on paper silk.  You can see breathtaking examples of these early India paper murals in the Chinoiserie rooms of historic palaces at Hellbrunn, Salzburg, Austria; Oranienbaum,  Russia; Drottningholm, Sweden;  Sans Souci, Potsdam, Germany; and  Schloss Charlottenburg, Berlin.  At Nostell Priory in Yorkshire,  famed English designer Thomas Chippendale used floral wallpaper murals in rooms filled with faux bamboo chairs and  japanned cabinets.
.

Then, when you think you’ve seen everything, there’s the Royal Pavillion at Brighton,  the spectacular pleasure palace built for King George IV.  Completed in 1822, and is the ultimate example of the late Chinoiserie style, with its opulent,  fanciful interiors and room after extravagant  room filled with handpainted Chinoiserie papers, ornament, and ceiling murals.

An Enduring Style
18th century classicists argued that the Chinoiserie style was ‘a ridiculous hodgepodge of serpents, dragons, and monkeys’  and maybe it was,  but then, even the most understated neoclassical Georgian house often had rooms whimsically decorated with floral murals “in the Chinese taste;”  a pagoda folly in the garden;  surely a pair of gilt brackets with blue and white porcelain vases, at the very least.   Robert Adam himself more than likely trotted about his home in a banyan and turban, as did most gentlemen of his day.

A general revival of orientalism in the late 19th century found theatrical Chinoiserie theme rooms at the height of fashion once again in Victorian homes, providing a serene escape from bustling industrialized cities.     From boudoirs to movie palaces,  Chinoiserie figured gracefully into Art Deco and “Hollywood Regency”  interiors, the exotic orient representing languor and wistfulness in an era of speed and new technology.   Throughout  the 20th century designers  from Sister Parish to Tony Duquette used Chinoiserie to add opulence, color, and grace to their designs.

Now considered a “classic” look, chinoiserie is very much on-trend as a versatile component in contemporary interiors.  Wallpapers are still being painted in China for companies like by DeGournay, Gracie, and Fromental, and are in high demand all over the world. Contemporary muralists Jennifer Carrasco, Scott Waterman,  Nora Johnson, and of course, Lynne Rutter, have all painted current styles of chinoiserie for their clients, each with a different spin on the traditional form, while top interior designers are incorporating chinioserie murals, furnishings, and accessories into their work in fresh new ways.

Is this a Chinoiserie revival, or the perennial flowering of an immortal style?

Further Reading:
Chinese Wallpaper in Britain by Emile de Bruijn: the author of one of my favorite blogs has finally put out a fabulous book with great images and information about the Chinoiserie papers I adore!!


Flowering Chinoiserie:  Painters who share this obsession may want to consider taking this  workshop on creating your own chinoiserie murals! 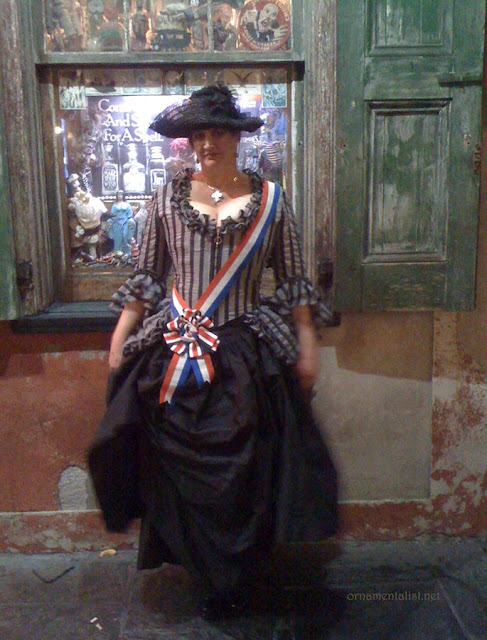 Happy Bastille Day to all my French and Francophile Friends!

Read this great post about Marianne at Little Augury

It's kind of exciting to see one's name in print, spelled correctly and everything.

I'm pretty shy about getting my picture taken but in this case I dosed up on rescue remedy and tried to smile.

Nice interview written by Anh-Minh Le for the Stylemaker Spotlight in this week's Home and Design section of the San Francisco Chronicle.  Anh-Minh is also the Editor-in-Chief of Anthology Magazine.


Several people have asked:  my Belgian linen painter's smock was custom made for me by Kathleen Crowley.

How Roman construction techniques influenced a classic design phenomenon.
What was I doing in Bulgaria? A lot of people asked me this. Well I was fortunate enough to have an ulterior motive, accompanying the Maestro for the debut of his orchestral piece Certitude and Joy played by the Sofia Philharmonic (and which was *ahem* dedicated to moi)  but also what I was doing in Bulgaria, what I usually do, of course, looking for beautifully painted architecture.
So there we are at the famous Rila Monastery, built in the 19th century in the Bulgarian National Revival style, and I notice the brick stripes of the walls and arches are painted.  Of course they are making an obvious reference to the Roman walls that are all over the country as this area was part of the Roman Empire, and the Byzantine Empire, and then of course the Ottoman Empire.  Also prominently featured are the black and white stripes so common in Ottoman mosques.

The "Opus Listatum" pattern is typical of late Roman walls, which were built with a core of  concrete and faced with alternating "stripes" of brick and rock ("rock" sometimes being salvage from older buildings.)  This was generally done to save on costs as bricks were becoming rather expensive.

This look became more deliberate and ornamental in Byzantine architecture, as seen in the Theodosian Walls of Constantinople constructed around 440 AD, and it then influenced the design of mosques and ablaq style masonry, and over the centuries worked its way back to Italy where alternating black and white striped stone walls graced churches and palaces.
Currently a trend in fashion and a perennial design motif in contemporary interiors, black and white stripes seem to be everywhere in design magazines these days. And I am sure red and white stripes will have their day again soon!

Back again to Bulgaria, where Revival architects and designers in the 19th century made reference to two major influences in their culture in the form of Roman and Ottoman occupations of their country.  I have to say I like both stripe patterns, I particularly like them used together, as they provided architectural and graphic support to the amazing colorful murals adorning the porch arcade.
Watch this space for future posts about Rila Monastery and its fabulous murals.

unless otherwise noted, all photos in this post by Lynne Rutter, Bulgaria June 2011  click on any image to view larger