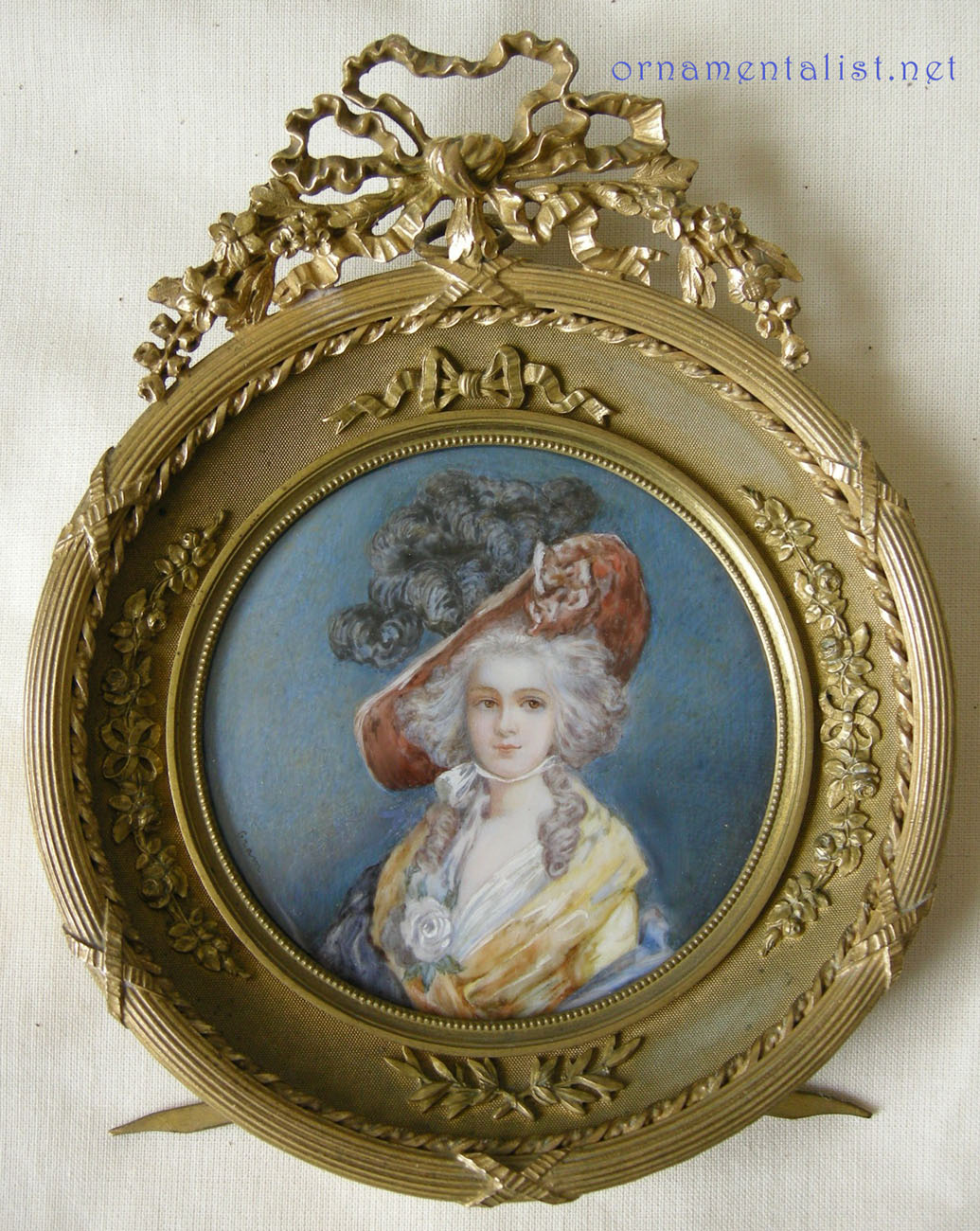 One of the remarkable miniature portraits collected by my great-grandmother is this charming painting of "Lady Smitson," as this is labeled on the back.  Having inherited this collection, I am carefully cleaning and documenting each piece as I have time.  This painting is signed "Gram" on the front, and dated "80" on the reverse, and set into an elaborate frame of brass.
Lady Smitson is realistically and beautifully painted, with texture and brushwork recalling the English School style.  Her clothes and hair are in the fashion of the 1780's. The I don't think this is a copy of another painting but rather an original and lively (and possibly idealized) portrait of a beautiful and fashionable lady. Who was she?  I wish I knew.


you may click on the images to view them larger

I recently completed a floor for a new furniture and design shop in San Francisco using a really hip-looking interlocking hexagonal pattern.  I have a bit of thing for hexagons in general, so this pattern really excited me.
My design was interpreted from African textiles, with a nod to the mid-century fabric patterns such those by mid-century design icon David Hicks, who had put his own spin on this look in the 1960's.
As the shop is in a long, narrow space, over 50 feet deep but only 10 feet wide, I designed a very large scale repeat, and elongated the pattern to help foreshorten the room; so even though the pattern is "stretched" it does look symmetrical, and the room appears wider and more stable as a result.

The pattern was painted onto the concrete floor using floor and patio enamel from Benjamin Moore, and a huge stencil I designed and cut in my studio Look carefully and you can see how the repeat fits together.

"Ritches"  a vintage furnishing store  opened in the ActivSpace on 18th and Treat St. in San Francisco. Image via the Bold Italic.

It is a magnificent building with substantial and wonderful architectural features. But when I first saw this house on Broderick Street in the NoPa neighborhood  of San Francisco's Western Addition, it had easily the most unflattering paint job on it I have ever seen:  dark brown trim cut the facade into squat proportions, intricate details imprisoned under layer upon layer of indifferently slopped-on paint.  Horrified, I mounted the stairs and rang the bell. You poor thing, I thought, who did this to you?

The home's owners called me (not a minute too soon!) looking for a sophisticated, urban look.  They also wanted to show off the unique period features of the Edwardian architecture with its generous nod to the Beaux Arts style.


We chose a hazy, grey/green for the "base" color of the design. Most of this  color is used on the sides and back of the house.  On the facade itself, there is very little "base" as most of its surface area is actually "trim" - with massive brackets, prominent mouldings, and columns.  To make this look cohesive I limited the contrast between these two colors.  In addition, a slightly darker, celery color is employed around the windows, to help the columns stand out a bit more, and then we had a bit of fun by using a very current color of teal on the window sashes.


Homeowner Gisela caught the gold bug after an on-site gilding lesson and tackled the gilding of details herself, following the few rules I gave her "gild anything round, sticking out, or just asking for it."  I think she showed admirable restraint!


Though budget would not allow for a full restoration of the facade, we were at least able to restore its dignity, and give a fresh face to this grand lady.

An Ornamental Mystery in Pennsylvania

Some months ago I was contacted by a reader, Teresa Huhn, who had a mystery involving the ceiling of her Pennsylvania, home, which was built in the mid 1940s.  The ceiling had been relocated there from a much older building, but which one?  Teresa sent me thrilling photos of the ceiling and told me she'd heard  "two possible histories  provided by relatives of each side of the original owners’ families.
History #1 says that the ceiling was from the Thaw Mansion, Lyndhurst, that was located along “Millionaire’s Row” in Pittsburgh, Pennsylvania.
History #2 says it is from a German church."
Was I intrigued?  You bet!    I was inclined to rule out the German church because the imagery in the ceiling isn't religious in nature, nor is the ornament so particularly German, although I have seen its like all over Europe, including parts of Germany.  I consulted some others about this,  who thought it could be German, or Swiss, or maybe French, but it also could be a mix references.   I  then had a major diversion reading up on the lurid history that lead to the near-ruin of the Thaw family and the subsequent disuse and eventual demolition of Lyndhurst, their palatial Gothic Revival country estate.  Lyndhurst was torn down in 1942 after years of neglect, and it did seem likely that some of the architectural elements salvaged from the mansion by antique dealer Vernon Regal may have well have been built into somewhat more modest homes in the area.
I decided to investigate the source of inspiration of the ceiling rather than speculate as to its original site.   It's rather nicely painted and in excellent condition, it's typical of the kind of work in "revival" style mansions built in the late 19th century for the new American aristocracy. When it was moved, the ceiling may have been "chopped" or altered in proportions, making it harder to place its original location. It may have been a flat ceiling, rather than pitched as it is now.
I reminds me of the kind of thing you'd see in an early renaissance chateau, like  La Roche Guyon castle or Chateau de Pierrefonds.  Could it be the work of French painters?

My fellow Ornamentalists, if you would like to weigh in on the origins of this ceiling, or its style,  by all means comment and help us get to the bottom of this mystery!

I'd like to thank Ms Huhn for sharing her wonderful ceiling with us, and I  am given permission to say that this marvelous ceiling is currently for sale, and comes complete with a 6 bedroom 6 bathroom house built in  the Midcentury Eclectic Style (sorry, I just made that up) as well as a lovely bit of land in Wexford, Pennsylvania.

Are you cursed with a boring white ceiling and would like something ornamental to improve your life?   Please feel free to contact me, I'd be more than happy to paint something for you.


Click on images to view larger.  photos in this post by Teresa Huhn, published here with permission