The Putti of the Palazzo Albizi

Along the Borgo degl'Albizi in Florence, fortress-like palazzi form deep canyons of stone facades, though which flows a river of pedestrian traffic.   At the center of this strada is the Palazzo Albizi.  Like most of these palaces the former home of the once-powerful Albizzi family is now divided into many shops, offices, and apartments, but is especially notable for reclaimed rooms on the street level, now the flagship store of "Maestri di Fabbrica."

I am told that the frescoes were painted by Bernardino Poccetti or one of his pupils in the late 16th century.   In some areas the restoration of them is a bit ham-fisted but the overall design makes clever use of the space and there are plenty of thrilling details.

These trompe l'oeil murals now form a spectacular backdrop for the handcrafted work of a number of Tuscan artisans; displays of natural cosmetics and candles; a very nice buffet serving local specialties; and a boutique dedicated to fine local wines and olive oil. It wasn't until Theresa Cheek visited us in Florence that I discovered there was also a small back room with a surfeit of decorative art books at only €10 each.


One room in the shop was formerly a chapel; its ceiling populated with putti carrying symbolic items such as a fish hook-styled anchor, a cardinal's galero, and "Maltese" crosses, one a symbol of the Knights Hospitaller, a medieval religious military order, another a reference to the "Holy Military Order of St. Stephen Pope and Martyr" founded by Cosimo de' Medici in 1561. 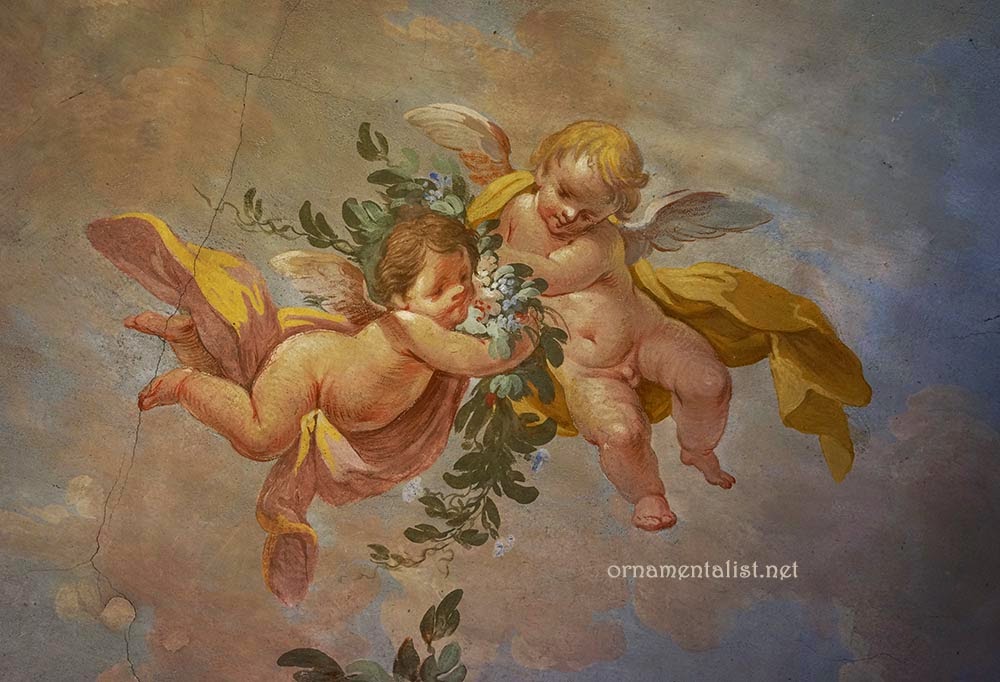 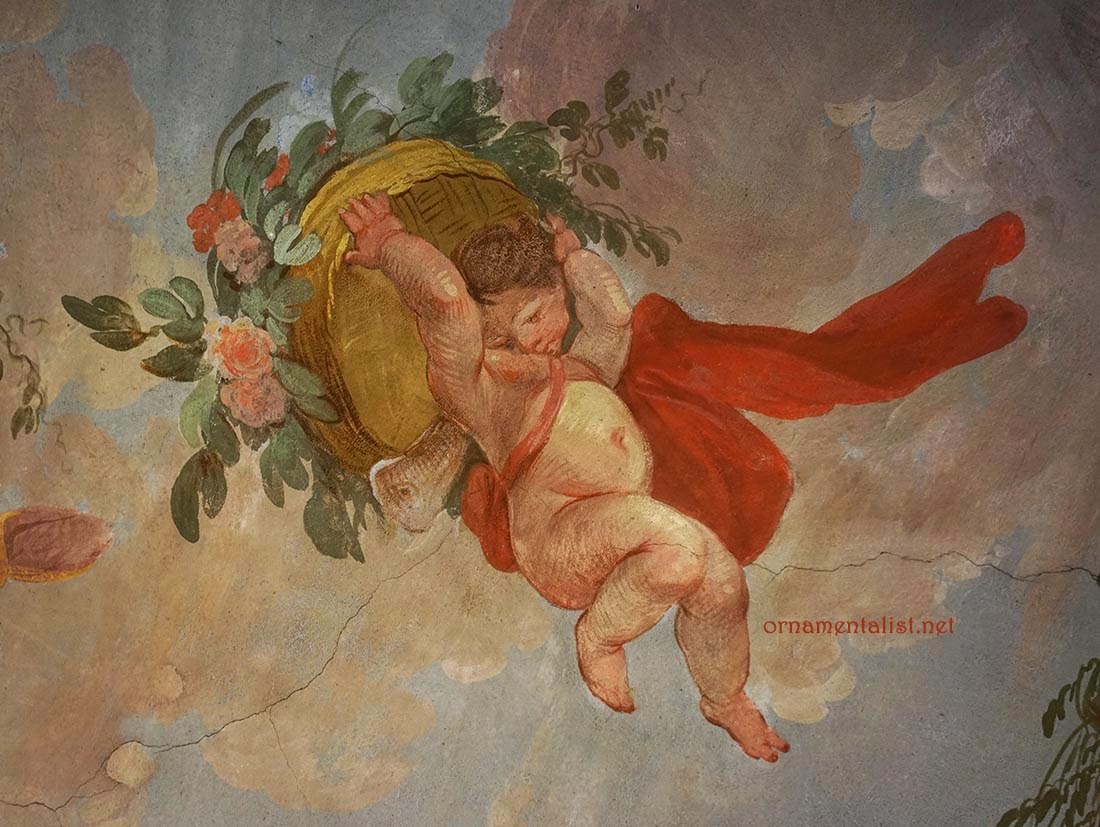 Also, some pretty good putti painted into these ceilings. If you are like me and you are always looking for good putti.

*The English spell the name Albizzi. I have no idea why.

While in Florence I started collecting photos of old doors.  I tend to do that when I travel.  So many of the great doors in the historic center of the city are covered in studs. Florentine palazzi were built like fortresses, with their imposing entrance gates opening into central courtyards.
I noticed even the smaller doors were covered in studs.  Nothing says "come on in" like a door riddled with  nails.

Centuries of political upheaval and the astonishing wealth of the Florentine families created an architecture that from the outside looks foreboding, closed, cold, while inside they were splendid and open. Much like the Florentine people themselves-  reserved or even off-putting at first, after a few meetings they become warm and amiable.

As a giant fortress-like palazzo became unnecessary, and over time, infeasible; most of these urban castles were divided up to make apartments, offices, etc., while sharing the original entrance; a phalanx of doorbells illustrating the division of space.
Many of the old palaces have a small buchette del vino near the entrance. This was a mini-portal through which noble families could sell wine and olive oil from their country estates without letting the riff-raff into the palazzo.  (There is a great collection of photos of these traditional Florentine niches on facebook.)

The doors in the historic center are, with rare exception, varnished wood. Painted doors are quite rare.  Unlike Paris, where the wood is usually a cleverly painted faux bois, these doors are simply varnished. I even watched several of them being refinished and was amazed and the thickness (and age) of the wood, and of course wondered what kind of varnish they were using.

Single entrances stand out for their relatively modest scale.

And then there are all the clever additional doors, created to make entrances in odd places, as space became more and more valuable.

Many of these doors require stooping to pass through. This is especially true of those doors inside large old courtyards, but I found plenty built under windows or stairways all over the old city.


More photos of Florentine doors on my Flickr page

And soonest our best men with thee doe goe

Death be not proud, though some have called thee
Mighty and dreadful, for, thou art not so,
For, those, whom thou think'st, thou dost overthrow,
Die not, poore death, nor yet canst thou kill me.
From rest and sleepe, which but thy pictures bee,
Much pleasure, then from thee, much more must flow,
And soonest our best men with thee doe goe,
Rest of their bones, and souls deliverie.
Thou art slave to Fate, Chance, kings, and desperate men,
And dost with poyson, warre, and sicknesse dwell,
And poppie, or charmes can make us sleepe as well,
And better then thy stroake; why swell'st thou then;
One short sleepe past, wee wake eternally,
And death shall be no more; Death, thou shalt die.
John Donne, 1610

Until I can create a fitting tribute for my father, I can but offer John Donne, and a black chapel in Florence.


.
photos in this post © 2014 by Lynne Rutter
click on images to view larger
Crucifix carved by Antonio and Guiliano da Sangallo, 1483