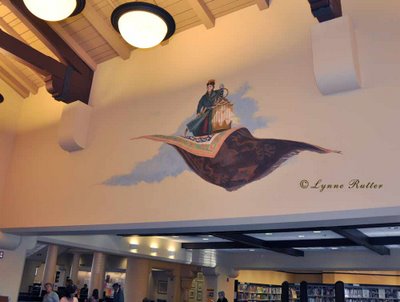 The Russian Prince brings home the Firebird
This week we will be finishing a large children's room mural for the Burlingame Public Library,
Commissioned by the Burlingame Library Foundation, the murals draw inspiration from the "Golden Age of Illustration" the great storybooks of the late 19th and early 20th centuries, like Maxfield Parrish, N.C. Wyeth, Arthur Rackham.

The Burlingame Library is a charming Spanish Revival style building was designed by architect E. L. Norberg and completed in 1931.
The children's room is a large space with soaring, beamed ceilings, textured plaster walls, and a lot of odd angles. This presented a challenge as there is no one focal point to the room, nor is there a large uninterrupted space where one might normally site a mural.
So I designed a mural that uses the architecture, grates, doors, and arches, as part of the composition. 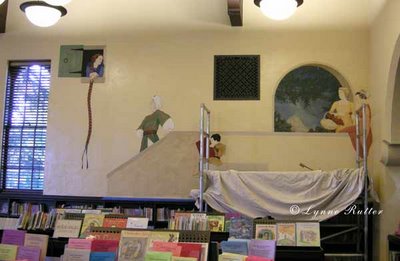 Work in progress on the north wall.
We painted the murals on canvas in my studio, then glued to the walls and in some areas, additional painting is done on site. 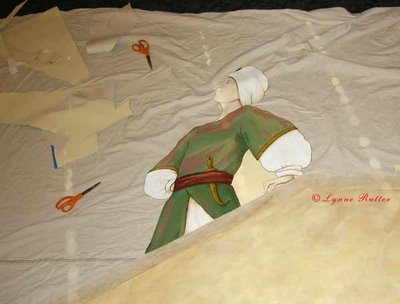 The Foreign Prince, being cut out prior to installation. 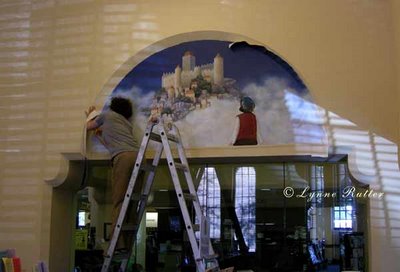 installing the castle mural in an arch
The Burlingame Library will "unveil" this mural during their Centennial celebration on Sunday, October 19, 2008.