In the late 18th and early 19th centuries, miniature eye portraits were all the rage. This was after the late 17th century rage for miniature portraits of any kind. They were painted most often using watercolor or gouache, on a substrate of ivory or parchment, then set into a bit of jewelry- a pin or pendant.
In Victorian times the eye portrait was often a piece of mourning jewelry, but the origin of this form was as a token of love.
I have had, for rather a long time, an obsession with eyes, used as symbols in my paintings. So naturally I am fascinated with these tiny symbolic paintings, the lover's eyes.


According to The Art of Mourning:
"Eye portraits are considered to have their genesis in the late 18th Century when the Prince of Wales (to become George IV) wanted to exchange a token of love with the Catholic widow (of Edward Weld who died 3 months into the marriage) Maria Fitzherbert. The court denounced the romance as unacceptable, though a court miniaturist developed the idea of painting the eye and the surrounding facial region as a way of keeping anonymity. The pair were married on December 15, 1785, but this was considered invalid by the Royal Marriages Act because it had not been approved by George III, but Fitzherbert’s Catholic persuasion would have tainted any chance of approval. Maria’s eye portrait was worn by George under his lapel in a locket as a memento of her love. This was the catalyst that began the popularity of lover’s eyes. From its inception, the very nature of wearing the eye is a personal one and a statement of love by the wearer. Not having marks of identification, the wearer and the piece are intrinsically linked, rather than a jewellery [sic] item which can exist without the necessity of the wearer."


I'd love to be a collector of these, or to have just one of them. Perhaps I will paint one of or for my own best beloved, as a follow-up to the maxi-eye portraits I painted a few years ago, of Erling Wold, myself, and our "adopted" daughter Laura Bohn.


The Art of Mourning more about Victorian mourning jewelry
Interested in collecting? Antiques Roadshow has some tips.

Recently I completed a project three or more years in the making, for a wonderful home in Orinda, California.  Built in the style of a Landhaus-Villa, the architecture combines elements from Italian and Austrian hunting lodges, with detailed with custom polychromed ironwork, and antique handmade bricks stamped with the Hapsburg crest.
My patrons love Italy as much as I do, so for our principal design element I took inspiration from the the painted ornament of the early Renaissance Basilica of Santa Croce in Florence.
This element was adapted and hand-painted 66 times - a natural, hexagonal number, also a sphenic number, adding a mathematical stability and a sense of architectural symmetry to a slightly off-center space.

The color palette was adjusted to suit the decor of the house, the bricks, the fabrics in the room, the lemon yellow walls.  Terra-cotta banding,  wasabi green, with pure red and yellow-ochre panels with trompe l'oeil,  and quatrefoils of deepest blue make up the borders. Rather than the lapis blue you might expect, the field is a deep turquoise color scattered with 22 karat gold stars. 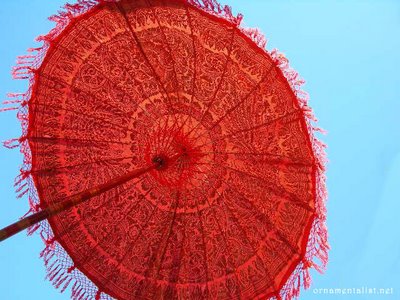 Labor Day - a day arbitrarily marked as the end of Summer. White pants? what about them? For San Francisco, it's the beginning of the Indian Summer, the warm big sister to those halcyon days to which we look forward all the year.